I arrived in London early this morning for a (business) meeting in Victoria, so took the opportunity to drop by Ham Yard, which is a few minutes walk from Piccadilly Circus, off Great Windmill Street. The early commute into London was typically unpleasant. All twelve carriages on the train from Leighton Buzzard into London were packed and, with the warm weather refusing to entirely give way, the London Underground heaving as usual, and with a little less than an hour to spare, I very nearly gave up the idea at Green Park and stayed on the Victoria Line train. 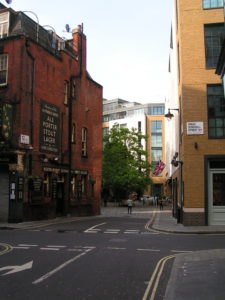 The view towards Ham Yard, from Great Windmill Street

In case you’re wondering (in which case you haven’t been paying attention), Ham Yard was the location of  The Scene Club, one of the most important Mod clubs in London during the early sixties. Almost as importantly, it is a location in my next book.

Arriving at the junction of Ham Yard and Windmill Street, I was not optimistic that the basement formerly occupied by the little club that had played host to the likes of The Who and The Animals in 1964 had survived redevelopment. The buildings to the right and rear of the picture on the left are all new, the older buildings having been cleared away to create the new Ham Yard Hotel (the building in the background). 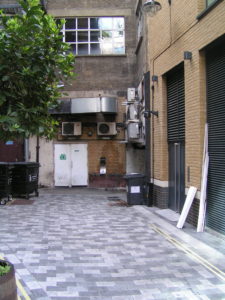 At the rear of The Lyric, public house

Happily however, as I entered Ham Yard and turned left, to the rear of The Lyric (the pub on the corner), there it was. Tucked away, in the far corner behind a wheelie bin and not exactly picturesque (I don’t think it was ever that – not even in 1964). The doors leading to the stairway down to the basement and the old Scene Club.

Of course, I’ve no idea what is down there now or whether any sign of the former club still exists. It’s been fifty years since The Scene closed its doors to the dancers, bands and faces of sixties mod London. But I’d very much like to find out. Even if there is no sign, it would be great to have a look around the old place.

Alas, that is for another day, if indeed it is possible at all and it may not be. Unless, of course, someone out there knows who owns/has use of the building now and can pull a few strings for me. There’s a pint in it! 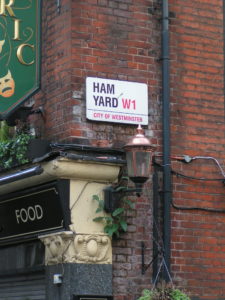 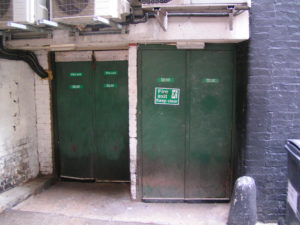 This entry was posted in Mods and modernism. Bookmark the permalink.