A trip down memory lane

While in North London yesterday with my friend Janice, I paid a short visit to Vale Road N4. The northern end of this little road, is mostly terraced housing. When I was a kid, the houses were semi-derelict and, on one side, were eventually cleared and replaced by modern (and rather ugly), red-bricked council houses. On the other side, the old houses were retained – I’m not sure why. Perhaps the Council had a limited budget. The southern end of Vale Road is/was mostly industrial. Several well known manufacturers had their factories there including Maynards (the sweet people) and Accoson Limited (who make scientific instruments and who are now based in Harlow, Essex). I say ‘mostly’ because in between the Maynards sweet factory and the ‘Derby Works’, a large factory where The Power Flexible Tubing Company were based, was a special school at which my father was caretaker.

It is rare now to find a school with a resident caretaker – school estates management and maintenance was privatised long ago (more’s the pity), but in the days of my youth most schools had a ‘school keeper’ and often, like us, they had a house on site. In our case, it was a small cottage with three bedrooms – it didn’t gain an inside toilet until I was into my early teens, as I recall. I lived there from shortly after my birth until I was sixteen. Sometime after I left, the school was closed and the whole site cleared.

I have been back a few times since then and seeing the place is always a somewhat surreal and slightly unsettling experience. All of the buildings in Vale Road that I remember as being present when I was a child are still there, looking almost exactly as they were. Except my house and the site of the Vale School which is gone, completely. As though it has been erased, quite deliberately. Even the signs on the walls surrounding the site are still there, along with the strange, black water tank attached high up on one of the factory walls – it used to overlook my bedroom (nice!). And yet the house, the school buildings, the gardens, playgrounds, swimming pool – everything within the site’s perimeter, in fact – has vanished altogether. Very odd.

Anyway, for Janice’s benefit (I think she found it hard to believe that there was ever a house and gardens on the site – which, incidentally, is now a container storage yard and car park) here is a then (1977ish) and now picture: – 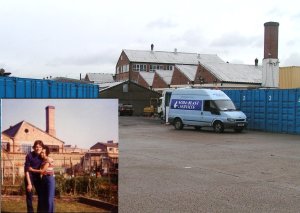 The lovely young lady on my left is Sandra (now Sandy), my girlfriend at the time. The chimneys in both pictures are the same.

And here is me standing in what was the drive up to the main school. In 1977, about ten feet in front of where I am standing, and about ten feet up, was my bedroom. Very weird. 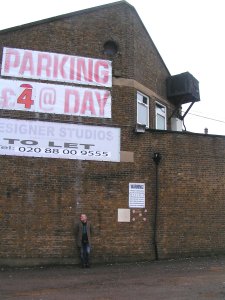