I have been particularly busy at work this week (the day job) with a long-haul trip to Exeter on Wednesday to deliver a training session to a group of staff, and then one thing after another today, leaving me too tired to write terribly coherently this evening. Exeter on Wednesday meant getting out of bed at 4.45am (I can’t remember the last time THAT happened) and onto the 5.45am from Leighton Buzzard into London Euston, a transfer to Paddington by Tube and then onto the fast train to Exeter which wasn’t that fast, to be perfectly honest. It arrived, in Exeter, just after ten.

I tried – I really did – to use my journey time constructively, but I find working on a packed train, with a Blackberry (which is the extent of the mobile technology provided by my employer to lowly individuals such as me) next to impossible. So I soon gave that up and attempted to finish Stephen Smith’s book, ‘Underground London – Travels Beneath The City Streets‘. 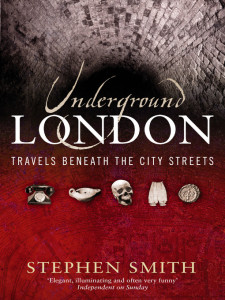 It is a fascinating book, though at times a little heavy going. Mr Smith is a journalist and the book reads, in places, a little like a very long newspaper article or a script for a television documentary. But, if you persist, it is full lots of fascinating details on the hidden wonders beneath London’s streets. Including, of course, the deep level air raid shelters, which was the reason I picked up the book in the first place. If you’re interested in such things then I recommend it.

I do have to report, however, a failure to finish it, even though I devoted both the outgoing and return legs of my journey to the task. This was in no way due to Mr Smith’s journalistic style, nor indeed to the content of Underground London. Rather, it was due to the fact that, like Harry Stammers, I can rarely survive longer than twenty minutes on a train, without falling asleep.

The trouble, I find, with sleeping on the train is that I always feel completely wrecked afterwards. Not at all refreshed. And I must therefore express thanks to my Exeter audience who endured my session with admirable (and quite miraculous) stoicism, given the subject matter and the fact that I was probably still half asleep for at least the first hour. Quite why they gave me a round of applause at the end was a mystery to me, but I was and am nonetheless grateful.

Incidentally, the venue for this miracle of endurance was the boardroom of Exeter’s cattle market (no connection with my work). It was a most unusual venue. Certainly the only place at which I have ever been asked to speak, with a sign on the wall stating “PIG PENNAGE, THIS WAY”.