This afternoon (Sunday) I took my in-laws, Jim and Bridget Mellett, for a look around the new Bletchley Park. I say ‘new’ because so much has changed in the last two years. It was my first look at the new visitors’ centre in C-block and at some of the newly restored huts. 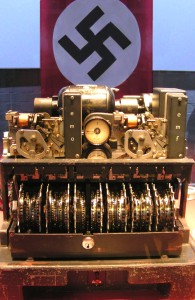 I ought to declare, now, that it is difficult for me to be objective about the Park because I so loved the way it was when I first discovered it. And I guess I’m still smarting from the way that the radio society, of which I am President, was evicted from the Park (as were most, if not all, of the other voluntary groups that together, worked so hard to save the Park in the first place). 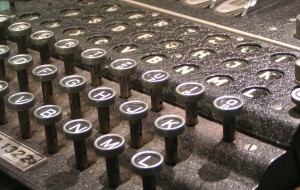 Block C, which was derelict only two years ago, is now fully ‘restored’ (did it ever really look like that?), as are some of the huts  and it seems only fair to say that a great job has been done on the buildings themselves. But what struck me, most of all, walking around them today, is how relatively empty they are – and lifeless. Many of the collections and people who made the Park so fascinating have gone. Block C itself – a vast space with a beautiful new concrete floor – is almost devoid of exhibits entirely, albeit that most of this building is given over to the reception, gift shop and cafe. Visitors are greeted with display boards and video footage, which was an ominous sign.

The approach to the restored huts has been to make them look as they did seventy years ago and to use video display to portray the people that worked in them. Which is fine. The trouble is that once you’ve walked into one room with a desk, a typewriter and an old coat hanging in the corner, you don’t really need to walk into another… and another… and another. I kept thinking, ‘Yes, but where are the exhibits?’ 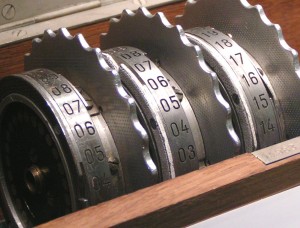 Two years ago, visitors could walk into Hut 1, for example,  and see a teleprinter in action. Or try a morse key. Or have a volunteer demonstrate picollo (the mode of transmission used by the Diplomatic Wireless Service to send signals to our embassies overseas).  Or try one of the radios on display. They could talk to someone who understood and used this equipment professionally and had personal experience of the kind of the work that was done at the Park. Sadly, all that seems to have gone.  Hut 1 is now empty (the exhibitor was forced to leave) and most of the displays around the Park are static.

Trying to be positive, I must say that I liked, very much, the use of sound around the Park. As you walk past the restored tennis court, for example, you hear the sound of people playing tennis and similar has been done elsewhere. It is very well implemented and really adds atmosphere.

Staying positive, the Enigma and Bombe displays in the basement of B-Block are, of course, wonderful and a real highlight. BP is worth visiting for that alone.

But then, having enjoyed the fantastic display in the basement of B-block, upstairs comes as such a disappointment. The bay where we spent so many weekends running GB2BP (then the Park’s resident amateur radio station), demonstrating morse/teletype/vintage and modern radio to the public, now houses a very weakly implemented wartime school classroom. It is nothing more than a few rows of old school desks and chairs. Embarrassing, to be honest.

And that’s the trouble, really. Other than the Enigma and Bombe machines (etc) in the basement of B-block, there’s just not very much to see in the new museum at Bletchley Park.

Worst of all, is the dreadful fence, erected by the Bletchley Park Trust to segregate the new museum from the rest of the site and, especially, from The National Museum of Computing (TNMOC). There can be no justification for this eyesore and it really is disgraceful that BPT persist with it. 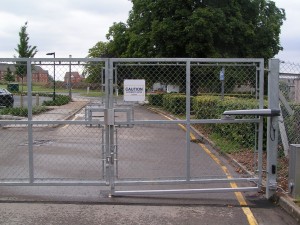 Having finished our tour of the new museum, we were forced by the fence to exit the main museum site and then to walk the whole of the length of the Park, uphill, to get to the National Museum of Computing to see Colosssus and the other wonderful exhibits there. For elderly visitors, this is quite a trek – Jim and Bridget both found it hard going. Were it not for the fence, this would not be an issue.

Entering TNMOC, the contrasting styles of the two museums is immediately apparent. Whereas the main museum was mostly devoid of exhibits, TNMOC was packed to the rafters with exhibits and people only too willing to demonstrate and to chat about them. And many of these are working exhibits – so you can actually see the thing in use. 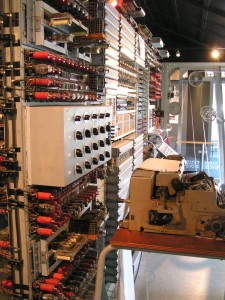 The Colossus rebuild at The National Museum of Computing

TNMOC is now the jewell in the Bletchley Park crown, in my opinion, and is actually a far more interesting museum. Of course it has, since it was segregated from the main museum, struggled to attract visitors in the same volume it did before the fence. That BPT have deliberately made it so difficult for visitors to get to TNMOC is shameful.

If you visit Bletchley Park, I do  strongly recommend TNMOC. It is a wonderful museum with some quite stunning displays. Its use of volunteers, with personal knowledge and experience of the exhibits and the work of BP, gives it a much more authentic feel than the shiny new visitors centre in C-Block.

Bletchley Park couldn’t stay as it was – I do appreciate that. The buildings were in desperate need of restoration. Thankfully, much of that work has now been done and the long term future of these buildings has been secured. So well done BPT for that.

But much of the Park’s past charm came from the authenticity of the place and, to a point, the fact that it hadn’t all been ‘restored’ in the modern museum style. More importantly, it came from the people – the volunteers – and the private collections based at the Park, each with their own fascinating story. And of course, the strength of the exhibits – like those in Hut 1, which housed the most fantastic collection (of diplomatic and spy radio equipment and a great deal more besides). It is such a shame that so much of that has been lost. For me, the new museum at BP feels a bit too much like all the other ‘dead’ museums one visits. Static exhibits and endless display boards with nobody there to explain them.

Still, for me, Bletchley Park, as a whole, will always be a magical place and it was looking at the Colossus rebuild, in TNMOC, that I was suddenly reminded why. Sticking out from the teleprinter attached to Colossus was a sheet of paper with those two little words (or is it three?)…. 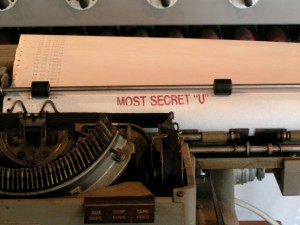