The Battle of Wood Green

Well, that’s a relief. ‘The Battle of Wood Green’ (part 2 of the trilogy) is finished at last, pending the final proofing. 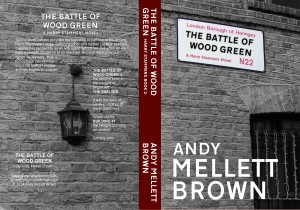 Believe it or not, it has taken me the best part of a year to get it to this stage, but I am delighted with the end result.

It’s not the writing that takes the time (although it does take time, of course, but that’s the fun part). It is the endless revision and, if you’re self publishing, the type setting and cover design.

This time around, the cover picture was taken in Christina Street,EC2 a turning off Phipp Street in London’s Shoreditch. 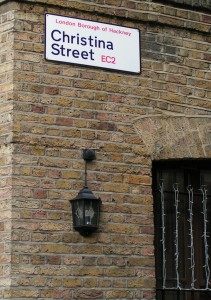 The area’s narrow streets (and, in particular, the building at 73 Great Eastern Street, which was called ‘Excalibur House’ in the late 70’s and early 80’s), feature heavily in the book. Excalibur House was once the central office of Britain’s ultra right-wing political party, The National Front. 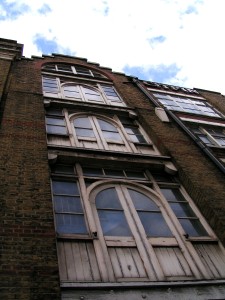 The building is now known as ‘Citfin House’ and houses the College of Central London.

Before I start writing, I like to walk around some of the streets and buildings that will feature in the book, taking as many photographs as I can. It helps me to build up a feel for the place, which I can then use as I start to think about the events that are going to take place in them. Below is Blackall Street – a narrow, very atmospheric little street behind Citfin House. 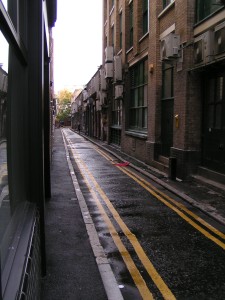 More pictures coming of the places in ‘The Battle of Wood Green’, as we near release.

Now onto the final book (I can’t wait to get cracking). Trouble is, I need to find a German U-boat…